My name is Allie Phillips and I am just like you … someone who wants to live life to its fullest and without feeling sick and tired all the time! But for each person, that can mean different things. After several years of life bouncing me around, I got fed up with having no energy and feeling like was happening TO me. And that’s when I discovered energy laws, energy healing and essential oils.

I now take 15+ years of learning and practice and uniquely combine multiple modalities to help people gain control of their wellness and to help animals live with comfort in our hectic world. I love helping our animal companions because for those of us who have them grace our worlds, they are our soul mates.

I was born and raised in a small town in Michigan and spent most of my life there. After law school, I became a Prosecuting Attorney and handled cases involving the worst of humanity. I loved my work, but it took an invisible toll on me. In October 2003 I moved to Alexandria, VA where I continued my legal career as a national educator for prosecutors and extensive travel took a visible toll on me. In May 2011, I launched Manifested Harmony and began teaching classes while still working full-time as an attorney. In March 2015, I moved back to Michigan and have established Manifested Harmony in Lansing.

In my legal career I am an award-winning published book author. I am internationally-recognized and requested to speak at conferences world-wide regarding the protection of animals, children and other vulnerable victims. As a result of my work, I am the Founder/CEO of Sheltering Animals & Families Together (SAF-T)®, a global nonprofit helping domestic violence shelters to create on-site pet housing.

How I started on the path to healing

While visiting the Green Valley Spa in St. George, Utah in 2006, I was introduced to the Law of Attraction. At the time, I did not comprehend two important events from that visit. First, my aura reading showed that I am a healer. My response to the aura technician was “I’m a lawyer, not a healer!” He laughed and said it would make sense later. Second, he gave me a DVD of The Secret and encouraged me to watch it. I watched it and was mesmerized (and freaked out) by The Law of Attraction. From that point, I shared this Universal Law with everyone who would listen and I started devouring every book and program on The Law of Attraction. Through my studies I learned that The Law of Attraction does not work alone … there are many other Universal Laws that, when working together deliberately, can manifest what we truly want. 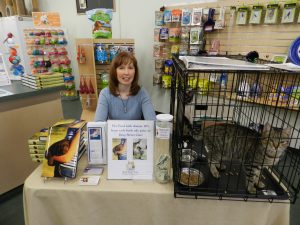 I was open to the concepts of the Universal Laws but as an attorney, I needed proof! So I learned how to listen to my inner dialogue and took steps to make it more positive. I clarified things that I wanted in my life and eventually those things appeared. My biggest proof was the manifestation of a book contract. I set my intention and believed deep down that it would happen. And then I sat back and watched the universe arrange things to bring me an amazing literary agent who brokered a DOUBLE book contract for me!!! In speaking with other book authors, they are surprised that a previously unpublished book author not only had a literary agent, but a double book deal! Had I known the rarity of what I manifested, doubt may have crept in and blocked my dream. That is just one example of how deliberately understanding the Universal Laws can produce results!

I reflected on the aura practitioner telling me that I was a healer. There was nothing in my life to prove that, so I needed proof. In fact, my health was awful. I was completely exhausted and depleted all of the time. In the fall of 2007, I discovered Reiki energy that can facilitate physical, emotional, mental and spiritual wellbeing. When a Reiki practitioner was able to remove an ache in my left shoulder within 15 minutes that had been present for a year, I had my proof! I immediately signed up for a Reiki training classes and in 2008 and I became certified as a Usui Reiki Master-Teacher in 2011 through the Reiki Center of Greater Washington. I instantly knew that I wanted to offer this energy to animals which was not being discussed back then.

Reiki then led me to Integrated Energy Therapy® in 2009 and I became a Master-Instructor in 2011 (through Steven Thayer, IET Founder). IET is an angelic energy that “gets the issues out of tissues” and helps to resolve emotional, mental, spiritual and soul-path issues that can manifest as physical ailments.

IET then led me to crystals. I have always been a collector of rocks and in 2011 I became intrigued with crystals and their energy. In 2012 I became a Certified Crystal Healer and in 2013 I became an Advanced Crystal Master after intensive training (Hibiscus Moon Crystal Academy). I was trained by a science teacher, and have continued my crystal education since then. I incorporate the science and metaphysics of crystals into my work and classes which makes them unique.

I also became a Certified Law of Attraction Coach (CLAC), Certified Life Coach, and Lightarian Angelinks Practitioner. I am a Certified Fairyologist and Fairy Reiki Master.

All of these certifications then opened me to essential oils. In February 2013 while on a flight from Phoenix to Washington D.C. with a plane-full of crystals from the Tucson Gem Show, I had an epiphany that I needed to learn about essential oils and pets. I found a lot of scary information online, but I also found Young Living. Since that moment I have been on a deep education involving the science, chemistry and energy frequency benefits of Young Living essential oils. I choose Young Living because of my work with animals and shelter pets. What I did not expect was how the Young Living oils would improve my health and empower me to make bold positive changes in my life.

Attorney & a healer: A Unique perspective

I was perplexed as to how being an attorney specializing in criminal prosecution and victim advocacy meshed with my growing education in Universal Laws and energy work. In early 2011, I had an a-ha moment. Through my work in training criminal justice professionals, I want crime victims (people and animals) to become “whole” from their victimization. And that is when Manifested Harmony was born.

I am particularly passionate about helping animals. I have been volunteering my time for homeless animals since January 2000, have adopted eight beautiful shelter cats (five of whom have passed on), and fostered over 150 cats and kittens. I have offered energy healing and essential oils to thousands of shelter cats and family pets and have witnessed frightened, abused and injured pets recover from their trauma.

My mission is multi-layered: 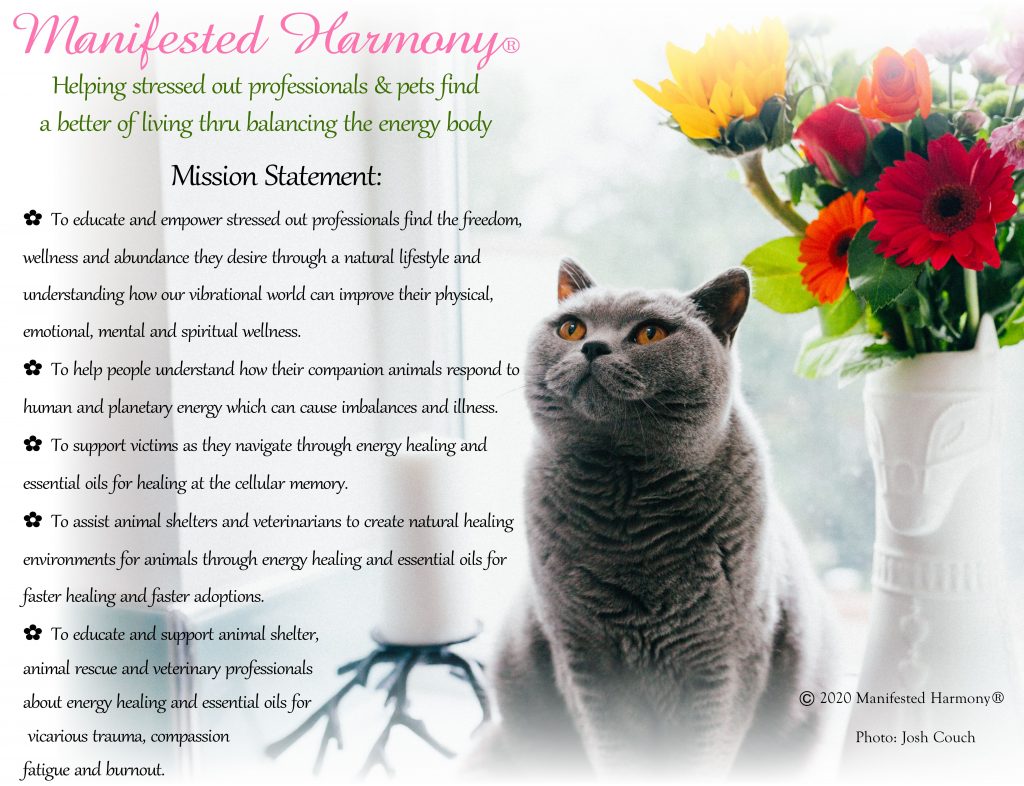 I firmly believe that when all living beings are well and live in harmony, we will live in a more peaceful and compassionate world, and with less violence. My hope is that anyone (2-legged or 4-legged) who has been victimized will find me so that I can help them heal.

Believing that I must practice what I preach, you are seeing the manifestation of that deliberate intention. And according to the adage, “when the student is ready, the teacher appears,” you have found this website and I would be honored to help you take that step toward creating the life you desire.

Manifested Harmony does not discriminate anyone seeking help based on race, gender, sexual orientation, religion, faith or anything else. All are welcome.